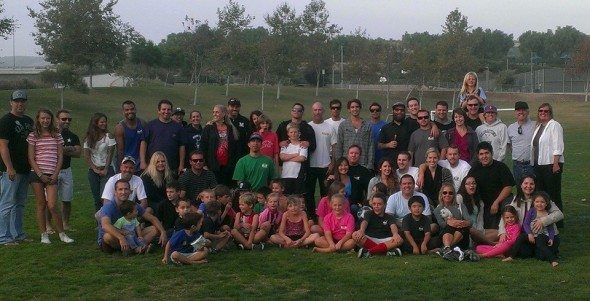 On October 26th, The Guillobel Brazilian Jiu Jitsu family held a get together at Liberty Park in San Clemente.  The people attending were members of Guillobel BJJ, friends and family.  Everyone brought a dish and had a great time.    Brazilian BBQ tri-tip was the centerpiece of the meal, of course, along with chicken, pasta salad, homemade salsa dips, and a bunch of other great entrées.  Just about everyone from the gym who could make it was there.  We hung out, ate, and watched Sensei Paulo take on his little ninjas in a soccer match.   The BBQ was a success and everyone had a great time.  As mentioned in an earlier blog about what makes a gym great, having outings such as the BBQ held last week brings the community closer to each other outside of the gym setting and can bring a deeper sense of pride among members.

It is often said that breaking bread with people is an important function in the process of building relationships with people.  This is one of the reasons why many families prefer to have dinner at the table together.  A family takes a break from their lives to explore and inquire about their loved ones.  That is exactly what this BBQ was bout for the family at Guillobel.

There is such an enthusiastic atmosphere at Guillobel.  You come in, put your gi on and get to work.  Not taking so much as 5 minutes to say hello to everyone. Now when you train you get sometime with individuals but you do not get to know them like you would on a personal level, let’s say, if you ate a meal with them.   When members meet outside of the gym they establish better relationships.  Just like a family having dinner at the table, the members of Guillobel took time out of the day to see how everyone is doing.  The more time you spend with someone, the deeper the relationship has become.   This idea is prevalent in Jiu-Jitsu as well.  When you are well acquainted with the people in your gym you make new friends and relationships that extend into your performance on the mats.  Think about it: the more comfortable you are with the people at the gym, and the atmosphere, chances are the better practitioner you will be.  Not only that, but having a sense of commensality among members galvanizes new members who may have been apprehensive about “going hard” in the gym or perhaps they simply had no pride because they felt no sense of belonging.  This will not happen at Guillobel.   Everyone is family at this gym. We all help each other out.  It is in the Guillobel’s best interest that everyone is welcomed, encouraged, and treated like family.  It is not just important to your Jiu-Jitsu but also to your character and of those around you.   Simply put: having an appreciation for the gym and it’s members outside of training creates lasting bonds that permeates the community and creates. Of coarse none of this is possible without the most important ingredient: BRAZILIAN BBQ.  See you on the mats. OSSS