This last weekend, February 18 and 19,  our Kid’s Black Belt Club Team was on fire! They competed at a major Brazilian Jiu-jitsu Tournament, The Kids Pan American Brazilian Jiu-Jitsu Championship and also at a WSA surfing contest bringing gold medals and first place trophies from both events.

Our children’s team was not the biggest in number of competitors, but they were sharp!

The Pan BJJ tournament was one of the biggest kid’s tournament ever. Competitors from all over the country came to fight for the Pan american champion title. It was amazing to watch kids as young as 4 years old competing with each other. They were so little, but yet so tough.

Personaly, I was really happy to see how the kids competition is growing every year. For the first time ever I saw a kid’s tournament where girls were fighting girls and boys were fighting boys, in all belts and all ages. If it keeps growing like that, and those kids stay until their black belt, the world will have the best generation of Brazilian Jujitsu black belts of all times.

Our Boys, Joaquim, Mitch, Jonas and Christian, competed pretty well, proving that our Kids Empowerment Program is one of the top in the world. Joaquim and Mitch got the gold, while Jonas got second and Christian, after a pretty exciting fight, came out short on points.

In a totally different event, our student Nico Coli won a WSA surfing contest in Huntington Beach at the Micro Grom division and took fifth at the 10 and under. His mom, Katherine, told me that Jiu-jitsu has been helping Nico in surfing a lot, and that he is more athletic now.

The Guillobel Brazilian Jiu-Jitsu Family and the San Clemente community are pretty proud of you guys! 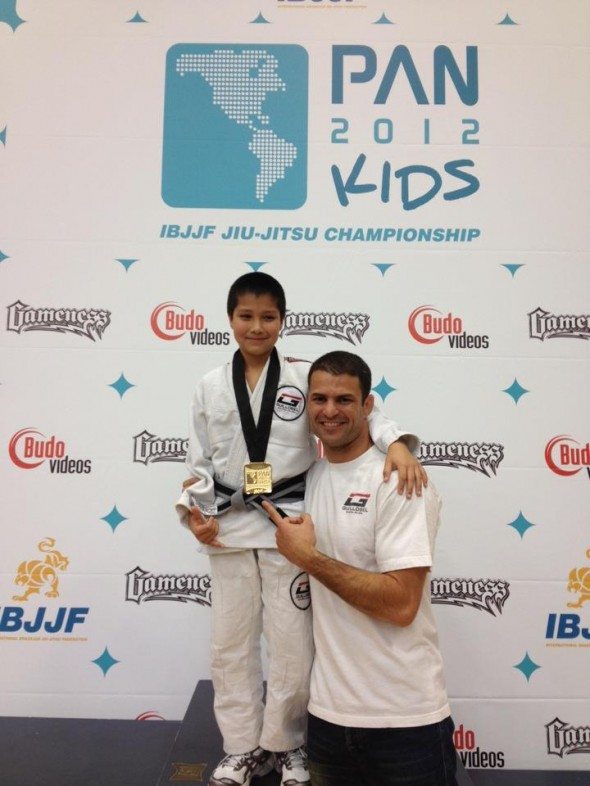 Joaquim O'Campo on the Podium