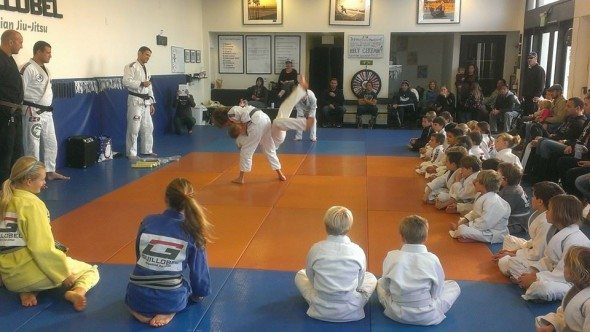 On Saturday December 7th, Guillobel Brazilian Jiu-Jitsu academy held it’s second annual holiday in-house tournament.  The gym hosted other schools in a local, low-cost double elimination tournament.  Pedro Soriano’s school came along with people from Oceanside jujitsu.    It was really exciting to have many members from our community come out and support family who participated and perhaps to even check out BJJ for the first time.

The tournament started with the kids first.   These types of tournaments are a perfect atmosphere for young children who are beginning their jiu-jitsu journey.  It also gives the parents and opportunity to see how their child has improved in the martial art both physically and emotionally.   Win or lose, it was difficult to find a child or parent who wasn’t having a great time watching their friends and family battle it out.  Hopefully these types of tournaments will motivate the children to do their best when training and for parents to support them in the process.  Around 12pm we hosted the adults.

The majority of the participants from Guillobel were adult white belts (In-house tournaments are especially advantageous for beginners who are thinking about competing).   It was exciting to see the progression of the adult beginners.  Again, win or lose everyone walked away a winner.  There wasn’t something to be learned.

Sensei Paulo will sometimes say, “There is only winning and learning.”  That’s what the in-house tournaments are about for Guillobel.  It’s really all about seeing where someone is at with their jiu-jitsu before they take it to bigger tournaments.   From first hand experience, and I’m sure others will agree, doing a tournament boosts your learning curve in jiu-jitsu.  You can never lose as long as you’re taking something away from the fight.  The same could be said about anything in life.  The next day on December 8th the academy also held its belt and stripe ceremony.   Not only did the in-house tournament give people a confidence boost but it also let’s their instructors know where they’re at in their jiu-jitsu game.

The gym welcomed 4 new brown, 1 purple and 5 blue belts.  It was a great weekend for everyone at Guillobel and an even better way to end the year.  This now begins a new chapter, not just for those who’ve received new belts, for everyone going fresh into the New Year with a clear focus and new goals.  2013 was great year for Guillobel Brazilian Jiu-Jitsu Academy.  Here’s to an even better 2014!