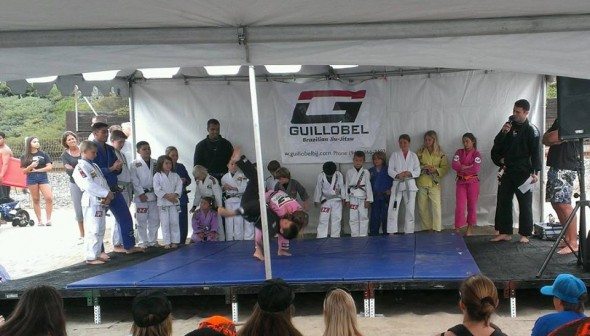 This year’s event, the city of San Clemente did an amazing job making the kids pavilion stage more accessible and with a better sound system. They even hire for the first time a professional DJ. The beach was packed even though the weather didn’t help much. Overall, it was a great event and we were proud to be invited again to participate in it. We were the only school to have two days of demonstration.

Our Kids Black Belt Club Demo Team did great part of the demonstration and they are getting better every year. It was fun to watch the crowd’s look of amazement every time one of our Kids was showing more advanced techniques like takedowns or any kind of BJJ submission or self-defense.

We had seven groups of kids demonstrating Brazilian jiu-jitsu self-defense techniques, with ages ranging from 5 to 13 years old. We also had three very knowledgeable black belts showing the crowd some of their moves – Sensei Paulo Guillobel, Andre Lucic and Claudio Ribeiro.

One of the biggest reasons for the success of our Demonstration Team (Demo Team), was the special Demo Team Classes designed to prepare our team for the event, where our students had hours to practice their martial arts techniques and organize their routine.

During these classes, our instructors did a great job supervising the students and letting them decide which Brazilian Jiu Jitsu moves they would use for the Ocean Festival demonstration in San Clemente. Our goal as mentors is always to stimulate our student’s creativity, team work and leadership, therefore preparing them, not only to Martial Art events, but also for a successful future.

This video shows our Demo Team rehearsing their routine three days before the event.

So overall, it was another great weekend for The Guillobel Brazilian jiu jitsu family in San Clemente, Orange County, and we would like to thank all of the parents, students and instructors for participating and making this Brazilian jujitsu demonstration the best ever!