1
by Paulo in News 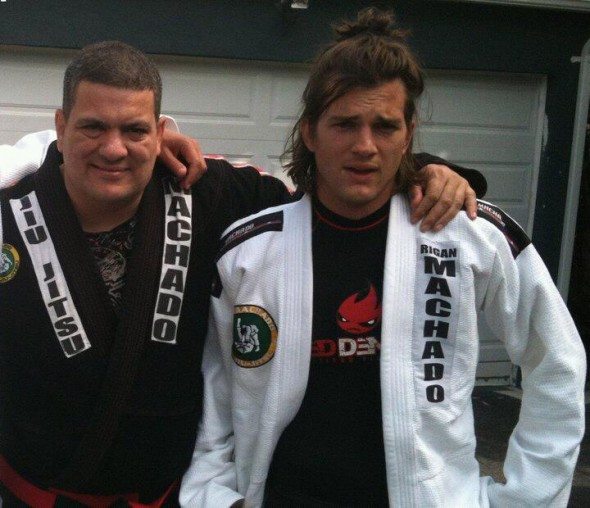 Master Rigan has taught numerous professional MMA fighters, such as BJ Penn, and celebrities such as Ashton Kutcher, Chuck Norris, Steven Segal, Michael Dudikoff (The American Ninja), and others. He also made the first American BJJ Pan American Black Belt Champion in the history of our sport.

Master Rigan comes from a famous family of Jiu-Jitsu Black Belts. His four brothers are also very accomplished in BJJ,  like Jean Jacques Machado, known world wide as one of the best ever.

Master Rigan was one of the pioneers here in the USA to spread the Brazilan jiu-jitsu. There was a time when Master Rorion Gracie, Rickson Gracie, Royce Gracie, Renzo Gracie, Carlos Machado and Rigan Machado were teaching at the same location, in the garage of one house in Redondo Beach, CA, the birthplace of BJJ in the USA.

In January of 2000, I came to America to have the privilege to train with Rigan Machado, and his jiu-jitsu had great influence on my. His more than 30 years of practicing of Jujitsu gave him a unique ability in teaching the art and make many Champions from scratch.

Master Rigan’s uncle, Carlos Gracie Sr. is the founder of Brazilian Jiu-Jitsu. The Machado Family was raised together with the Gracie Family, and  is one of the most traditional families in our Martial art style.

It will be a honor to have Master Rigan at Guillobel Brazilian Jiu-jitsu Academy. His Seminar will be for children and Adults (man and woman), and it will be open for students from another academies. The spots available for Master Rigan’s seminar are limited, so make sure to reserve yours before is too late. For more information call Guillobel Bjj School at 949-366-2107.